As we’ve travelled south we’ve met many backpackers making the trip north that have told us Colombia is amazing and the favourite country of their trip. The funny thing is that no one could really put their finger on what made it so great and now writing this I find it hard to pin point it as well. It’s not simply because of a specific town or city, not the food or drinks, and not one single natural setting, historic sight or the recent history itself. It definitely has all of these things, but it’s the passion and energy of it’s people that ties it all together. They are friendly, welcoming, proud, energetic and passionate. Whether it’s the music, football, towns or cities, the food or history they love it and will tell you with so much passion that you’ll believe it too. The overall factor that has made my stay in this beautiful country is how welcome I have felt since arriving.

Not so long ago it was rated one of the deadliest countries in the world and now one of the most visited and a favourite for backpackers. In 2002 during one of the most dangerous periods for the country Colombia received less than half a million foreign visitors. In 2016 Colombia is one of the top growing tourist destinations and had around 3 million visitors.

From Caribbean beaches to Andean mountains reaching almost 6,000m and back down to the amazon rainforest, the landscape is more diverse than nearly any other country on earth. It also has deserts, rivers, lakes and many empty surf beaches.

Well known around the world, Colombia has a long history of drugs being grown, produced and sold around the world, but that’s nothing Colombians are proud of. Cocaine itself for Colombians is definitely not related to fun times with your mates like in other western countries. For Colombians it symbolizes tears, blood and some of the worst times imaginable. Even mentioning the famous criminal Pablo Escobar shouldn’t be your first topic with locals, as lots of them take it very seriously and would rather forget those times.

Medellin’s Gondola build for people in poor neighbourhoods so they don’t have to walk to the hills. And Medellin at night, below. And Colombians are really good at forgetting bad things that happened in the past, and love to celebrate the good ones. As we learnt from the amazing Free Walking tours in Medellin, the city faced some serious times from the drug cartels, then government and FARK supporters. But despite that, Medellin managed to build their metro system, which wasn’t only a transport system but has become an important cultural symbol. A symbol representing the pride, passion and times when Colombian people can band together during the tough times and build something incredible. Still today, Medellin’s metro is respected and is untouched by graffiti, rubbish or violence.

Colombia has amazingly fertile land and the perfect climate to grow just about anything. We were spoilt with beautiful tropical fruit, a lot of which we’d never seen or heard of. All of the fruit and vegetables are huge, fresh, healthy and super cheap! Unfortunately, though, Colombians eat a terrible diet and don’t eat much fruit but juice it instead and add loads of sugar to everything! They also love everything deep fried, bread with too much sugar and cheese in everything. A classic dessert is Ensalada de fruit (fruit salad), but don’t be fooled by the name, it’s a little bit of fruit with ice cream, whipping cream and grated cheese on the top. Even hot chocolate can be found with a nice chuck of cheese. 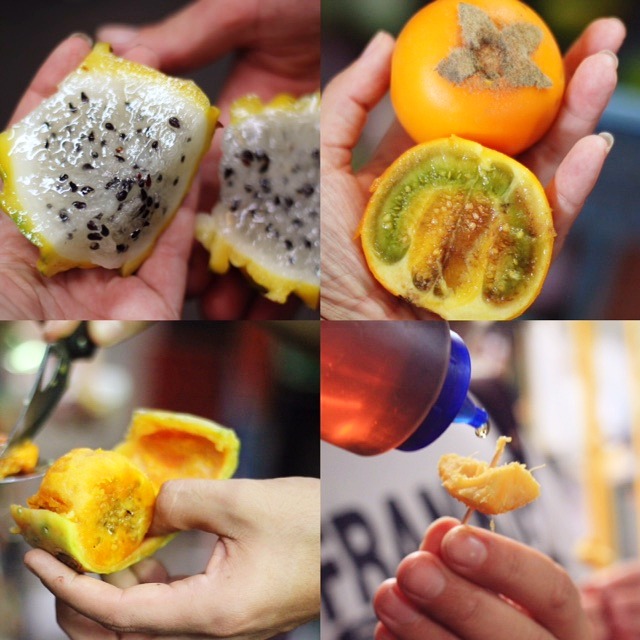 It is not only the traditional music but now reggaeton is the style which dominates the country and the rest of Latin America. And it wouldn’t be Colombian if it is not listen as loud as as possible.

Also salsa music and dancing is a big part of Colombia, which means that you wouldn’t find a Colombian who doesn’t know the steps. Especially in the city of Cali, the birthplace of salsa is incredible to see that people still go out for dancing even during the weekdays without getting drunk.

North from Cartagena lies a little beach village Taganga, known as one of the cheapest places in the world to complete the Open Water Scuba certificates. Tourism has grown way too fast for this little beach town to handle and sadly it’s reflected in the enormous amount of rubbish lining every street. If you’re interested in the PADI dive course it’s great for around $300US, otherwise it’s not worth the visit. Click here for the best hostel in Taganga, Casa Moringa. 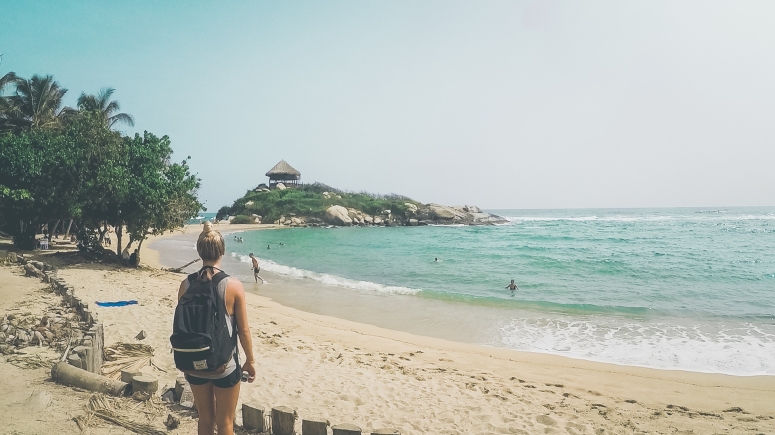 Santa Marta is a transport hub, from where you can visit Tayrona National Park with its beautiful Caribbean beaches, depart on the Lost City Trek or visit the tiny mountain town of Minca for a break from the coastal heat. To stay at a fantastic hostel/hotel in Minca, click here.

During our trip we were mostly taking buses, but this time we decided to fly with Viva Colombia Air to Medellin as the bus price was the same as flight and we saved 14 hrs. Medellin is a huge sprawling city, with a great history and some very passionate football fans. The city has gone through some very dark times from the cocaine era in the late 80’s and early 90’s when Pablo Escobar basically ruled the city and made life in Medellin a horrible mess, through to the early 2000’s with government, police and military corruption and the civil war with FARK. It seems now though that things are on track and the people of Medellin were so welcoming and really happy that tourists were finally visiting their city again. It’s not uncommon for the locals to say hi and even shake your hand as you walk around the different neighbourhoods.

We managed to find 2 great Airbnb. One for an amazing price further from the centre and the second in the famous Poblado suburb. Click here for a discount if you are new to Airbnb.

To escape the busyness of the city, the little town Guatape is a nice choice. A beautiful town surrounded by a huge valley which was flooded to create a lake for hydro electricity and also a massive rock with 740 steps you can climb to for a beautiful view. For a hostel recommendation click here(The owner is a legend).

Our next stop was a tiny town that sees very few foreigners, San Carlos Colombia. We spent two weeks learning Spanish, hiking and swimming in rivers and under waterfalls. If you want to experience a place as a local and learn Spanish off the gringo trail, check out Colombian Spanish language school Spanish Adventure run by amazing duo Daniel and Camilo.

Down in the coffee region we spent some time in the beautiful towns of Jardin and Salento and found a huge highlight in the Valle de Cocora with the tallest palm trees in the world, which quickly become our favourite part of Colombia. Click here for the best places to stay in Jardin, and in Salento

Crossing over the Andes for the first time to Bogota was a spectacular bus trip with towing peaks, deep valleys, canyons, waterfalls and rivers for hours. Bogota’s old town is very hip, with loads of cafes, restaurants and bars, even a couple of craft breweries. One of the main things about Bogota that we’d heard from other backpackers was the Graffiti and street art tour and it is definitely not to be missed. The city is covered in artwork everywhere you look as it’s not illegal as long as the artist has permission from the property owner. The tour gave us an insight into the political meanings behind a lot of the art and again a passionate history lesson from a great tour guide. Click here for the nice hostel in the old town of Bogota. 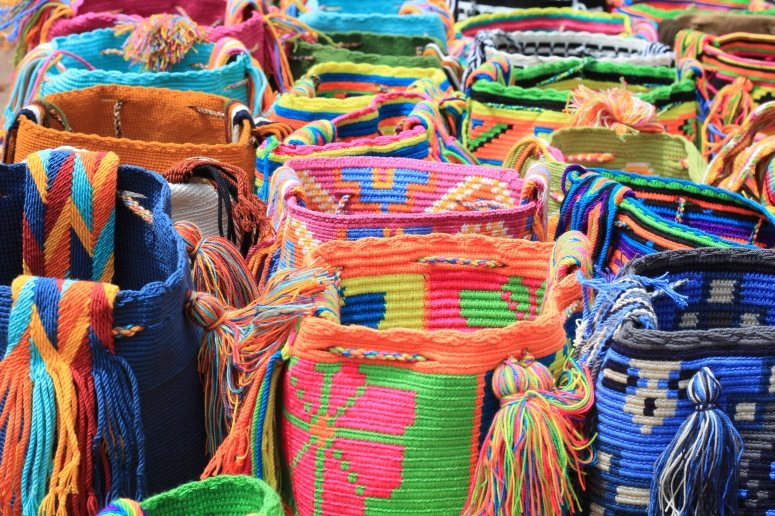 Email us at travelmindedpeople@gmail.com if you are interested in purchasing one of these bags

From Bogota it was back to warm weather and the Salsa dancing capital of the world, Cali. Walking around Cali in the year-round spring weather was really nice and come nightfall we hit one of the many bars where locals go to dance. For a chill hostel with free salsa class and breakfast, click here.

Something really different was waiting for us in the little village San Cipriano. Manly because of the transportation to this town. San Cipriano is a tiny little Afro Colombian village hidden away in the jungle with no roads, though there is an old unused train track. The locals have come up with an impressive and terrifying form of transport that sees the rear tyre of a motorbike balance on one of the train tracks pushing along a home made wooden trolley. They transport everything to and from the town on these mototrolleys, even a few gringos. The town is also known as a great place to go tubing down the river.

The last stop and also a recommend stop to break up the crazy long bus ride to Ecuador, is a nice, whitewashed colonial town Popoyan. Impressive how this town has kept its cleanliness and beautiful preserved buildings and town square. We stayed in a great hostel literally sharing a wall with the cathedral, and every night you can hear the choir singing.

From Popoyan to Ecuador, we would recommend to take a night bus if you want to make a stop at the impressive church Ipiales located just next to the border.

We highly recommend this country to anyone interested in…. well, just about anything. You’ll find it there!